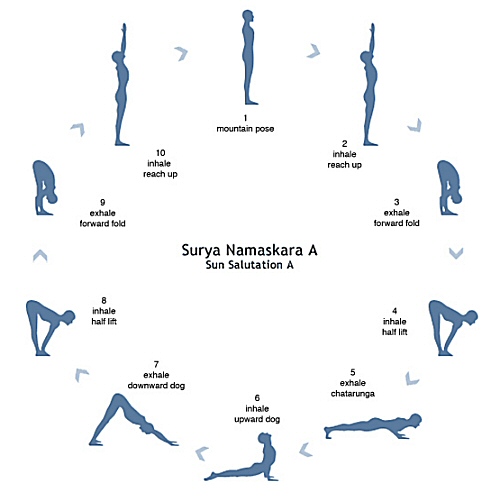 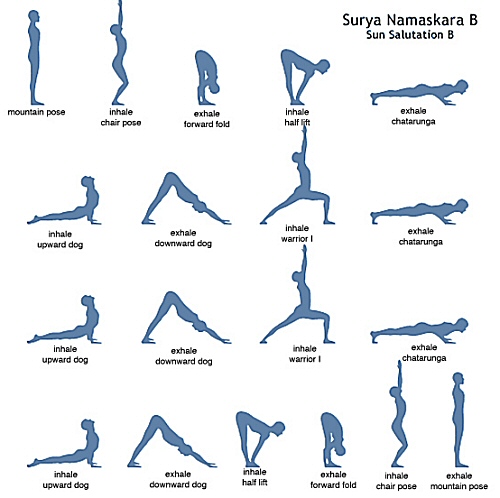 Practicing sun salutations on a regular basis is the perfect way to build strength and flexibility. There are various forms of Surya Namaskar sequences, but the most common are the A series followed by the more challenging B series.

Sun salutations are best practiced first thing in the morning, facing East as the sun rises. A complete round of sun salutation A consisting of 10 poses takes around a minute and a half including five deep breaths in your Downward Facing Dog pose.

Aim to practice five rounds of Surya Namaskar A followed by a couple of minutes resting in Balasana, otherwise known as Child's Pose, and in less than 10 minutes, you have completed your daily yoga practice!

NB: Steps 5 and 6 can be modified by dropping knees and chest to the floor and rising up to Cobra rather than Upward Facing Dog.

The more challenging Surya Namaskar B sequence has a total of 19 poses and adds Warrior 1 /Virabhadrasana 1 into the sequence on both sides.

Try to add two full sequences of the B series into your morning sun salutations. A full round takes about two and a half minutes including 5 long deep breaths held in the final Downward Facing Dog pose.

Sun Salutations offer the perfect way to practice yoga at home between your weekly yoga classes. Try to fit them into your weekly routine, even if you're feeling tired.

If you're not a morning person, then practice them later in the day, but do remember to leave at least two hours between eating a full meal and unrolling your yoga mat.